Feed-in-Tarif stopped in Spain: some more fuel from against renewables.

Spain is in crisis, in a deep crisis, and one of the consequences is that feed-in-tarif for renewables (and other energy sources too) was stopped. But this was not an isolated maneuver, there were previous advises from the energy sector and it is justified after that even from leftist newspapers. The last justification is based on this article and even uncritically accepted in blogosphere.The idea is simple: energy in Spain is very expensive, this is terrible in crisis time and the guilty are the renewables.

The problem is that nothing is so simple. Beginning with the news. The first news says that Spain is the most expensive country in the EU regarding electricity prices. The source is more modest, it says that it is the third for households and expensive for industries too. If we go to the real source, eurostat, the ranking is effectively second for households and seventh for industries. Ok, we are improving. However, those data do not consider taxes, this source adds the tax effect, and with that Spain goes to the 6th in the household ranking and 12th in the industrial. The main conclusion is that the data are not so definitive and the differences low.

But going even further I dared to make a simple correlation graph with eurostat data. It is shown below and draws electricity costs for households and % of renewables in the generation. The result is really striking!!! The trend line is negative, the more renewables , the lower costs. Of course this is not true, first because the trend in the figure is completely unreliable, there is no trend, and second because the costs of electricity a quite complex with many subtle concepts deserving more posts. 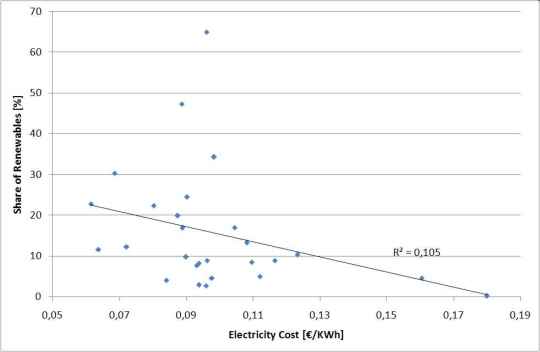 Anyway, I think that renewables have been and still are in the first view more costly than some other sources, but in the long-term they are really profitable for the whole society. And, as a wise man told me today at work stopping all the promising renewable industry in Spain, in the verge of profitability seems a really short-term sort-view idea.

Climate Wars: The war on books.

Comments on: "Feed-in-Tarif stopped in Spain: some more fuel from against renewables." (1)