Renewable Electricity, many reasons for hope

In a previous post, I mentioned the rough figure of 42% of the energy in the world devoted to electricity production, sometimes,  when we talk about energy and climate change we only think in electricity. It is a mistake I do frequently. So, OK it is just 42%, it is not all but it is almost half of the problem. So it seems a good starting point for the solution as well. And though the situation is not wonderful and we are in a hurry, there are some sings for hope just in the electricity production data by country. They are in the following figures: 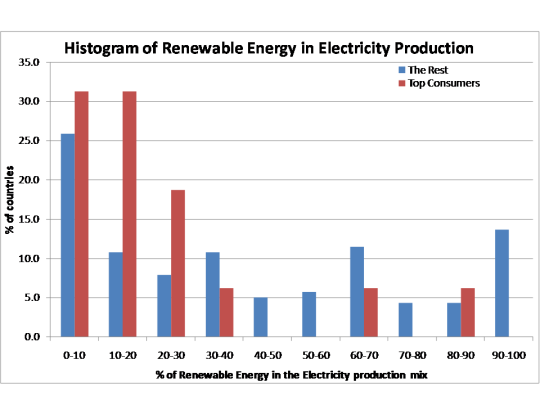 Share of renewable electricity by country, divided in the top consumers (80% of world electricity) and the rest 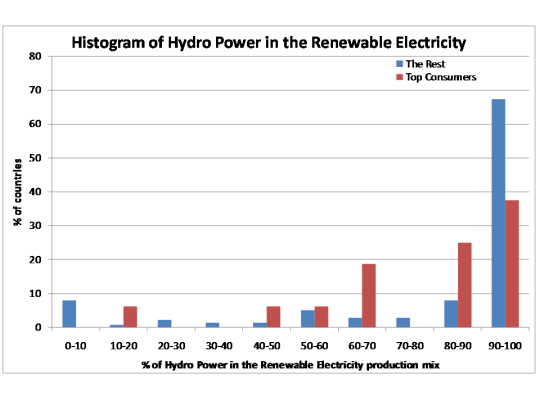 Share of Hydro power in the total renewable electricity by country, divided in the top consumers (80% of world electricity) and the rest

The so-called top producers correspond to the 16 countries that concentrate the 80% of consumption, the data come from the Wikipedia and are from 2009-2010, in this moment they should be better for many places.

Anyway, my hope comes from those facts: 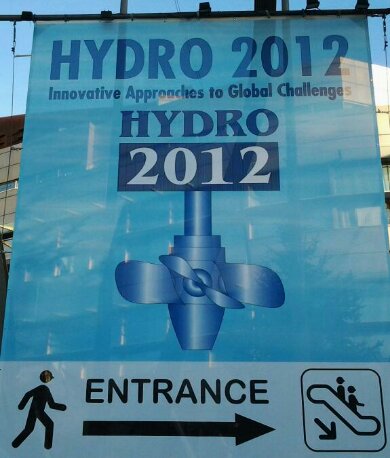 Photograph from the conference door

This conference has been held in Bilbao these days with good coverage in the news. I was positively surprised by the media impact of this conference as hydro power was a very important power source in the past here but is not in the main discussions nowadays.

In fact, the power of the water coming from the rivers has been one of the first industrial era power sources and it is still the most important renewable energy and the most widespread, maybe its great advantage is that it is not considered as renewable sometimes or that it has not grown in the last years. Or maybe hat it is very cheap because installation investments were done many years ago. Anyway, one way or another I have always thought that it produces a considerable percentage or world energy, however , checking actual figures I was negatively surprised to discover that its 3000 TWh of yearly production only account for the 2% of world energy demand.

As I did not assist the conference I do not know what kind of subjects were discussed there. Perhaps they covered many of the questions a have about water as energy source as:

Why did they say that Europe is not so interesting for this market compared to for example South America?
What is the potential of traditional hydropower to overcome thi
Why is mini and micro hydro power so forgotten as energy source?
Are the methane production of big hydro power well determined?
How advanced is the tidal wave power?
Did they visit the small but interesting tidal power station in Motriku? (60 Km from Bilbao)
Or tidal energy was out of the scope of this conference and traditional hydro power industry?