Recently I met an acquaintance in his new business: Urban Bikes . It is a business around electric bicycles, he sells them rents and repairs. It is not the only shop in Bilbao but certainly it is well located and collaborating with some other small businesses for alternative tourism offers. He told me that he hoped a great future for electric bikes in cities and even if it is not boasting in Bilbao for now it could be in any moment.

I do not know anything about this business but it seems he is doing a great job and I really hope he is successful because this would mean we are advancing in transport transformation towards lower carbon footprint. Because I have the feeling (someday I should put data in that feeling) that transportation is among the main carbon emissions activities the one that is advancing less or has less current possibilities to advance. Maybe this “small” electric vehicles will play a significant role in that transformation and not everything will be a technology substitution in cars.

My phots of electric cars

It is clear that for now electric cars are not changing the transport emissions in Spain with a very disappointing 70 cars sold in March. But I see some of them in the streets of Bilbao and in some other trips so, those are my hopeful photos of electric cars in the streets (I do not think any of them is a particular car but they are real and are being driven in the streets): 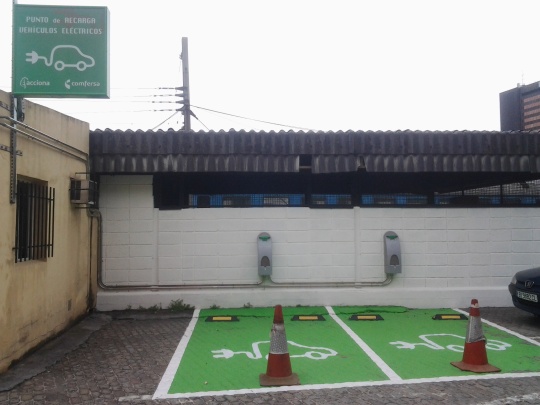 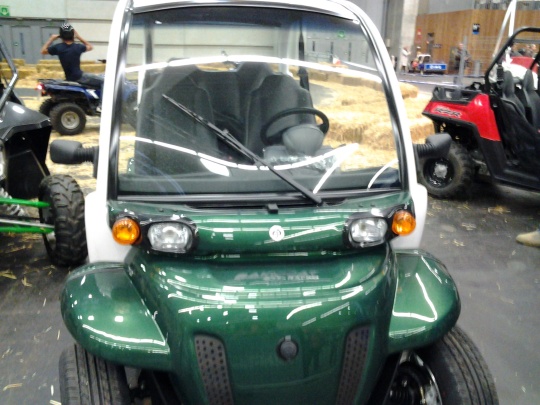 A recent article  in a general media mentioned the virtues of Chevrolet Volt, Open Ampera in the european version. Its numbers are astonishing as combines the comfort and autonomy of a Hybird car (or a fuel driven one) with the big batteries of many electric ones. The result can be a very low fuel expense of 1-2 lt per 100 Km. And the amazing thing, at least for me, is that it is not just a car in the exhibitions, it is in the streets and anyone can buy it, if you can afford to. It is more real than I expected.

No doubt,  this is another step forward, as it was my beloved Prius. Regrettably it is still too expensive, (twice the standard Prius), still far from the possibilities of most. I hope it will be getting more and more affordable, our future and a third  part of global CO2 emissions depend on transportation. So we need several kind of approaches to improve in this area and we need them fast.

Some time ago I mentioned this promising project called Hiriko a small electric city car following the concept by MIT . It seems a great idea but not always great ideas become real things, because the way to the great public is hard.

Nevertheless I read two positive news about this project in the last months, this piece of news in the very prestigious thinkprogress web , and this one mentioning the interest of the German railways on it.

None of them means real life success but they are small steps towards it. And this is hopeful for me because transportation is one of the key aspects of  Climate Change and needs maybe more innovation than others due to the lack of maturity of the alternative technologies.

A photo of a real twizy of someone I know

Transportation produces roughly one-third of our CO2 emissions. And as we are not going to stop travelling or getting products from other parts of the world (for the moment), one reasonable way to reduce our emissions is to change our vehicles,  optimize them, or both at the same time.

In this sense, hybrid cars leaded by my beloved Prius were a good first step that is getting some success in the last years, at least in my home city, Bilbao. However electric cars seemed to be further from real world use, competing with the weakening hydrogen cars. I mentioned a nice project some time ago, but it was just that, a nice project. In this context I got very positively surprised to see that the company that makes succesful F1 engines is able to sell a small but cheap electric real car in normal car market. It is called Twizy and I know a real user close to me (the photo is taken thanks to that). His main complain is about the charging time of the batteries, yea this problem is not solved, and the low vehicle range neither but it is a first step, and all the great developments were done in far from perfect real steps. One nice solution from Renault for the price reduction is to hire the batteries, it is a kind of loan from the company, payable with the low fuel expenses.

My main criticism about this car is that is not really a car, it has not windows, it is more of a hybrid between car and motorcycle and only admits one passenger. OK, but it is a first step, an electrical vehicle in the streets that gets energy from standard plugs.

One last thought, some complain about the risks of its lack of noise. How used are we to the problems of combustion engines! I hop we will have to adapt.